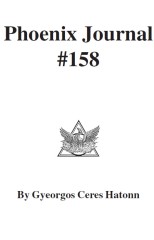 FOREWORD. REC #1 HATONN. THU., DEC. 14, 1995 7:36 A.M. YEAR 9, DAY 120. THU., DEC. 14, 1995. We are greatly honored and wish to give recognition to an author who has done a superb job of putting together a comprehensive Monologue on ELF waves and other dangerous pulse games. We wish to give Dr. John Coleman both credit and appreciation for sharing his information gathered and put to print that we might send it forth a bit further in the effort to bring it to your attention so that you can know what is taking place—that the Controllers wish you NOT TO KNOW. Moving within the same circle of necessary information and more connected than you might at first realize, you will find portions of a topic called DEPOPULATION by Mr. Rick Martin, Investigative Journalist. These are both frightening subjects for BOTH involve YOURSELVES! They are “things” which are in full-play to control and thin-out the population of human species and animal growth and propagation on your planet. The results of both will bring sickness and death AND terrible mutations to the remaining species if left unattended. All manners of microscopic entities from chemical ions to microbes can be sent forth onto the public without recourse and without realization—right through these pulse systems. Since Mr. Martin, at this time, only writes for CONTACT Newspaper I would suggest that you have to contact him at his place of business. There will be no separate published form other than perhaps reprints of his material. Dr. Coleman’s work, of which he now has at least THREE MAJOR PUBLICATIONS: Conspirator’s Hierarchy: The Story of the Committee of 300, Diplomacy by Deception, and now, Socialism, The Road to Slavery. Dr. Coleman can be contacted for acquisition of his books or for personal communications: WIR, 2533 No. Carson St., Carson City, NV 89706. I highly recommend his Newsletters and his publications. We also share some other works which we will enlarge on as we move along so we can save those comments regarding the publications. We will be touching more on Final Judgement by Michael Collins Piper and a book called Descent Into Slavery? by Des Griffin. The former is about the Kennedy assassinations and the latter is about the SYSTEM that has brought you to this point of world enslavement by the FEW of the global population. Do they overlap? Yes, because when you share TRUTH you have to overlap for MANY stories indicate at least one mutual fact and many assumptions or distractions. It is through the comparison of bits of fact that a WHOLE TRUTH can be finally achieved. My purpose is to allow you to FIND these puzzle pieces, fit the pieces that are truth and cast aside the pieces that are incorrect. ...