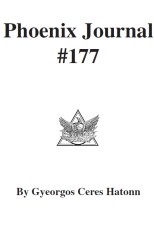 CHAPTER 1. THE NEWS DESK by Phyllis Linn 7/4/96. INDEPENDENCE DAY AGENDA. Have you seen the newly released film Independence Day? This statement made by its writer/ producer Dean Devlin appeared in a recent issue of the (Los Angeles) DAILY NEWS—it couldn’t be clearer as to intent, (quoting:) The reason why it’s called Independence Day is that we wanted to take what we think of as the best American holiday, strip the nationalism away from it and turn it into an international day. There has been this fantasy that if there was an outside aggressor, the whole world would band together and forget all of our petty differences. (And eagerly welcome in the New World Order! The film acts to soften us up—to anticipate a “real” invasion.) MILITIA ARRESTS The handwriting has been on the wall for some time. The militia was used as a concept to manipulate the minds of Americans—to train us to equate anyone who stands for the preservation of the Constitution and opposition to the NWO with fanaticism, terrorism, crackpot-ism, and racism. The recipe is simple and often used by the Elite: Take those who oppose your activities, infiltrate and set them up according your agenda, use the media (and potent trigger words) to create strong public opinion against them, and smash them under the guise of the “will of the people”, at the same time using the furor as a ploy for instigation of as many “anti-terrorist” (i.e., draconian “anti-citizen, anticonstitutional”) measures as possible. This old formula continues to work splendidly on prison planet Earth. Here it unfolds as portrayed in the July 3 issue of THE BAKERSFIELD CALIFORNIAN, (quoting:) PHOENIX (AP)—They’ve threatened to blow up power plants, government buildings, even the Hoover Dam. Some have held military exercises in the desert, firing automatic weapons and setting off bombs (nowhere does the word “allegedly” appear). With its wide-open desert spaces and tolerance for guns, Arizona has long been a breeding ground for self-styled militia members. The indictment Monday of 12 members of a group called the “Viper Militia” was just one in a series of cases involving paramilitary activity dating back to the 1970s. Arizona is “in the top five or 10 states” for militia activity, said Bryan Levin, an expert on the movement and assistant professor of criminal justice at Stockton College in New Jersey. He estimated as many as 30 militia groups have surfaced in the state. (Montana and Idaho are other states targeted as threats to the NWO.) Neither Levin nor David Rosenberg, who tracks militia groups for the Anti-Defamation League of B’nai B’rith in New York (say no more!), had heard of the “Viper Militia”, the group accused in a federal indictment released Monday of plotting to blow up government buildings in the Phoenix area. ...