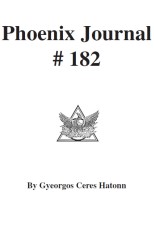 FOREWORD. REC #1 HATONN. SUN., OCT. 13, 1996 8:38 A.M. YR.10, DAY 058. SUN., OCT. 13, 1996. Since I am told we need to wrap up another journal which needs some kind of “foreword” I have used this opportunity to speak on some of the various topics I have had to neglect while attending court cases, financing problems and non-problems, and then, when the going gets rough, the adversary always slows us down by hitting below the belt and into personal and local spaces which have to have some ongoing attention. The Green Brigade and Abbott-Horn CONSPIRACY always needs attention. Then, as always, when we turn attention to these more localized problems, and I speak or write about them, we have to spend more time and days unwinding the knots and hearing reactions and excuses. This IS life as it is happening while we wish we could just get on with our work and/or sometimes (RARELY) spend a few hours doing something OTHER than focus on these things, including world events. Dharma is already asking why she can’t have a sabbatical because she hasn’t had a day off in over seven years, and every seventh year professors get a leave of sorts. Well, she has been the “student” so sabbaticals don’t come to students—just professors! Certainly they don’t come to secretaries for secretaries have to attend the business while the one who considers himself to be “topbanana” gets the sabbatical! Any of you secretaries who work for professors and scientists ever notice this strange phenomenon? We have a rather amusing time of studying “counting” while Dharma says the “book” says that God created the world in Six days and then always had the Seventh day OFF. I say, the bible was greatly tampered and don’t count on it being as written—especially about God taking the seventh day OFF. God never gets a break and, therefore, it would seem that neither do God’s people! Besides, mankind can’t even seem to come to a real unanimous decision as to just WHICH DAY is the Sabbath, much the less a year off for behavior meriting a sabbatical leave. ...