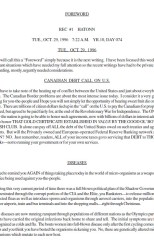 FOREWORD REC #1 HATONN. TUE., OCT. 29, 1996 7:22 A.M. YR.10, DAY 074. TUE., OCT. 29, 1996. We will call this a “Foreword” simply because it is the next writing. I have been focused this week on distant situations which have needed my full attention so the recent writings have had to be private and regarding, mostly, urgently needed considerations. CANADIAN DEBT CALL ON U.S. We have to take note of the heating up of conflict between the United States and just about everybody else. The Canadian Border problems are about the most intense issue today. I consider it a very good thing for you-the-people and I hope you will not simply let the opportunity of bearing sweet fruit die on the vine. There are trillions of citizen dollars tied up in the “call” on the U.S. to pay the Canadians for property seized, but agreed to be paid fairly for, at the end of the Revolutionary War for Independence. The ONLY way the nation is going to be able to honor such agreements, now with billions of dollars in interest added, is to honor THAT GOLD CERTIFICATE ESTABLISHED IN VALUE BY THE GOOD OL’ BOYS’ BUSH CLUB. It alone can pay off ALL the debt of the United States owed on such treaties and agreements. But will the Privately owned and European-operated Federal Reserve Banking network also WIN? NO. Just remember, readers, ALL of your income taxes go to servicing that DEBT to THOSE banks—not to running your government or for your own services. ...