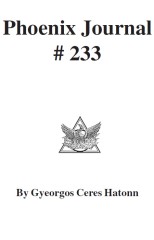 CHAPTER 1. REC #2 HATONN. SAT., MAR. 7, 1998 10:54 A.M. YR. 11, DAY 203. SAT., MAR. 7, 1998 THE KAHAL OF THE CAHILLA. The dispersion of the Jews (The Cahilla) which followed in 135 A.D., instead of destroying the Kahal, (Government of The Cahilla), served on the contrary to set it on a new and firmer basis, on which it has continued ever since. Wherever Jewish immigrants settled, they founded communities apart under the direction of the fraternities, and held to the precepts of the Talmud. Each community has its miniature Kahal. The different aims of these communities always found themselves intimately related with those of the Central body upon which their existence depended. So it was possible for the Jews to develop and operate a perfected system of espionage which they still maintain. In olden days as now, they sent agents to watch over Jewish affairs at police stations and other agents were posted at the doors of shops, hotels, business houses, law courts, and even in private homes to get advance information of all kinds. In this manner all kinds of things became possible, even blackmail, with which all kinds of political pressure could be brought to bear on Gentiles who had political influence in the Roman Government at that time. Hence, it is easy to understand the reason for the concentration of trade into Jewish hands with all these instruments of political pressure and advance business information at their finger tips at all times. There is a colloquial term that should always be coupled with the Dispersion. That is “Der Tag”, or “The Day of Redemption”, when World Jewry shall be gathered together again under one head, with all Gentile nations subservient to this world-wide Jewish empire whose governing seat is to be in Jerusalem. (U.S.A. and Jerusalem, Palestine.) (ZIONIST MOVEMENT) Millions of gullible Germans, as well as millions of gullible and illiterate Christians everywhere, thought back in 1914 that Der Tag meant the Day of Recognition for Germany as to her place in the sun as a nation. (H: Every day we learn more, don’t we? And keep in mind, this article was written in 1934.) It was a phrase and a term artfully “sold” to the German people, or rather, put in their mouths. Really it was Hebrew in meaning, indicating in the secret councils of Jewry that having provoked and produced the world war (one), with the white pariah nations thus engaged in slaughtering one another by the hundreds of thousands, the outcome could only mean the achievement by the Jews of an age-long goal; winning to the pinnacle of world-wide political and economic power. So the Germans, French, English and Russians went forth to fight this war of self-extermination, not knowing that in greeting Der Tag they were playing the game of Jewish world imperialists—as will be explained and authenticated in more detail further along. ...