Alcock John - The triumph of sociobiology 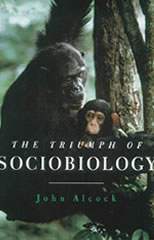 Introduction. On 15 February 1978, a young woman carefully poured a pitcher of ice water onto the head of Edward O. Wilson while he sat waiting to address an audience at the annual meeting of the American Association for the Advancement of Science. A band of accomplices joined their pitcher-pouring confederate on stage to wave placards and chant, "Wilson, you're all wet." After repeating this modest witticism for a few minutes, Wilson's assailants left the field to their victim, who dried himself as best he could with a paper towel and then delivered his talk without further interruption. In a world characterized by much more exciting and dramatic violence, this brief aquatic and acoustical assault was nevertheless moderately newsworthy because of its setting - a scientific get-together - and its target - a Harvard professor. Academics are a contentious group and academic arguments can get loud and nasty on occasion, but physical confrontations are rare. Even if fights were fairly common in scientific meetings, Wilson would hardly interest anyone fond of hand-to-hand combat. He is a world authority on ants and the other social insects, a tall, thin person with a passion for entomology, not fisticuffs. By his own account, he was utterly surprised to have achieved the kind of notoriety that evidently inspired his band of youthful opponents. But Wilson is also known as the "inventor" of sociobiology, having published a book of coffee table dimensions in 1975 entitled Sociobiology : The New Synthesis. In the interval between the book's appearance and the AAAS meeting, a group of Wilson's colleagues at Harvard University did some publishing of their own. Richard Lewontin, a leading geneticist, and Stephen Jay Gould, just beginning his own rise to fame and fortune as a writer on matters evolutionary, were among the authors of a manifesto printed in the New York Review of Books. ...