Aldred Guy - Wynn John - It might have happened to you 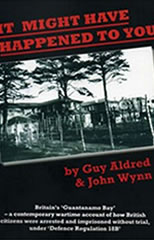 Dedicated to all the victims of witch-hunts and mass hysteria, especially those who suffered from government servants “just carrying out orders from above”. A special dedication to the victims of 18B and to the late John Wynn who compiled the original material under very difficult conditions and the late Guy Aldred –one of the few prepared to take an unpopular stand in wartime and oppose injustice at great personal cost even though the victims were at the opposite end of the political spectrum to himself. Foreword to the 2000 edition. In 1841 Charles MacKay published a book titled “Extraordinary Popular Delusions and the Madness of Crowds”. It is one of the few books published almost 160 years ago that is still in print today. It covers financial mania such as The South Sea Bubble and Tulip mania in Holland. More importantly it delves into political mania such as the Crusades and the Witch mania of the 16th-17th centuries. In the latter many thousands of innocent people were arrested on suspicion of witchcraft. Many arrests resulted from denunciations by neighbours and acquaintances. Once arrested, the accused had little chance of acquittal due to the prevailing mass hysteria and were usually judicially murdered by the most appalling and cruel methods. Many thousands perished in this early holocaust. How little human nature has changed was illustrated in the early 1990’s when a senior French official admitted that his government still retained several vaults full of letters, sent to the Gestapo by French citizens during World War II. The letters denounced friends and neighbours as resistance members or as being hostile to the German regime. They also resulted in the torture and death of many innocent people. The official remarked that publication of these archives would result in half the French population being tried for crimes against the other half. ...