Aloni Udi - What does a jew want ? 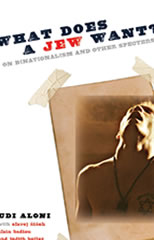 Author : Aloni Udi
Title : What does a jew want ? On binationalism and other Sspecters
Year : 2011

Foreword. Judith Butler. Udi Aloni’s collection renews a theological reflection in the midst of ordinary life, popular culture, contemporary scenes of life and death. His film, Local Angel, brings us into visual contact with Walter Benjamin’s concept of the “ruin,” that animated fragment from the past that drives us in ways that we cannot always know. He moves to the center of violent conflict between Israelis and Palestinians only to find there remnants of a theological relation to the “Temple Mount” that furtively circumscribes the struggle over land, property, ownership, and claims to time and space. In his film Forgiveness it is the land and the mental institution built there that acts as the ruin, foreclosing the possibility of a return to the death and displacement of Palestinians who lived in the village of Deir Yassin. The mental institution receives the Jew who emerges from the Nazi genocide as a muselmann - traumatized to the point of losing speech and selfreference. So the muselmann, the Muslim, the Christian, and the Jew are compounded at this multiple and unfathomable site of loss where, on the land where a Palestinian village was destroyed, an Israeli mental institution is built to receive the destroyed lives of Jews from the concentration camps. Madness ensues, but what alternative is there ? ...