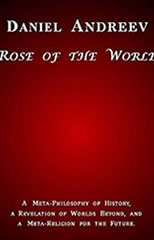 The Rose of the World and Its Place in History. The Rose of the World and its Foremost Tasks. This book was begun at a time when the threat of an unparalleled disaster hung over the heads of humanity-when a generation only just recuperating from the trauma of the Second World War discovered to its horror that a strange darkness, the portent of a war even more catastrophic and devastating than the last, was already gathering and thickening on the horizon. I began this book in the darkest years of a dictatorship that tyrannized two hundred million people. I began writing it in a prison designated as a «political isolation ward.» I wrote it in secret. I hid the manuscript, and the forces of good-humans and otherwise-concealed it for me during searches. Yet every day I expected the manuscript to be confiscated and destroyed, just as my previous work-work to which I had given ten years of my life and for which I had been consigned to the political isolation ward-had been destroyed. I am finishing The Rose of the World a few years later. The threat of a third world war no longer looms like dark clouds on the horizon, but, having fanned out over our heads and blocked the sun, it has quickly dispersed in all directions back beyond the horizon. Perhaps the worst will never come to pass. Every heart nurses such a hope, and without it life would be unbearable. Some try to bolster it with logical arguments and active protest. Some succeed in convincing themselves that the danger is exaggerated. Others try not to think about it at all and, having decided once and for all that what happens, happens, immerse themselves in the daily affairs of their own little worlds. There are also people in whose hearts hope smoulders like a dying fire, and who go on living, moving, and working merely out of inertia. I am completing The Rose of the World out of prison, in a park turned golden with autumn. The one under whose yoke the country was driven to near exhaustion has long been reaping in other worlds what he sowed in this one. Yet I am still hiding the last pages of the manuscript as I hid the first ones. I dare not acquaint a single living soul with its contents, for, just as before, I cannot be certain that this book will not be destroyed, that the spiritual knowledge it contains will be transmitted to someone, anyone. ...