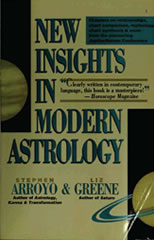 Introduction. Most of the material in this book was originally published under the title The Jupiter/Saturn Conference Lectures and derived from talks given at the remarkable and ground-breaking Jupiter/Saturn 7-Day Astrology Conference in Berkeley, California. Since the conference occurred during the July, 1981, Jupiter/Saturn conjunction in Libra, many of those attending were simultaneously having transiting Jupiter and Saturn aspect some natal planet or significant point in their charts. ...