Asatru as a religion 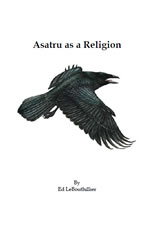 Asatru as a Religion. Asatru is a serious, modern religion inspired by historical knowledge of the past, but adapted to our current conditions. It seeks to enhance the spiritual connection of the past, present and future and to make the Gods and Goddesses of our ancestors relevant to daily life in today’s world. Asatru is not a role playing game. It is not a dress-up game. It is not an opportunity to fantasize about being a Viking or recreating a society that existed a thousand years ago. We want to avoid makebelieve weekend Viking role-playing and rather bring a spiritual vision and guidance leading our people to goodness and prosperity in Midgard and to a communion with their Gods, Goddesses and ancestors. Additionally, we are preparing the way for future generations. These are solemn tasks that require focus and seriousness. Asatru is derived from a deep understanding of the practices and beliefs of our ancestors. It is not just "made up." There is a strong historical basis for just about everything in Asatru. It has been said that "Asatru is the religion with homework" because there's so much to learn about in rediscovering the spiritual ways of our ancestors. To do this, we are learning about and reconstructing past beliefs and practices and then adapting those beliefs and practices to the modern world. Asatru is not part of a larger "Pagan" religious grouping which includes religions such as Wicca or other foreign or eclectic paths. We do not welcome their influences. Admittedly, we have some of our modern origins with some of those groups, but our values differ significantly. ...