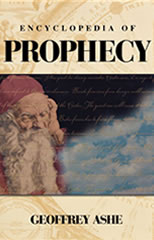 Preface. The word prophecy originally meant “inspired utterance.” A god or goddess or spirit or, at any rate, some unseen being other than the person inspired, spoke through that person. At first, prophecy did not imply foretelling the future, but that meaning developed, especially in Greece and in ancient Israel. Largely because the Israelite prophets’ predictions were preserved in the Bible and because the Bible became a sacred book for many nations, the predictive meaning of prophecy came to predominate in the Western world. Prophecy in the predictive sense, with or without a claim to inspiration, is the subject of this encyclopedia. A distinction is needed at the outset. The encyclopedia is not about intelligent anticipation or rational forecasting, such as that attempted by political journalists, economic prognosticators, statisticians, and scientists who project what they regard as historical and current trends into the future. Activity of this type enjoyed a special vogue between about 1965 and 1975, under the name of futurology. It is not considered here or is considered only marginally. One justification for considering other sorts of prediction is that the would-be rational sort has not been conspicuously successful. ...