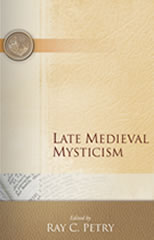 General editors' preface. The Christian Church possesses in its literature an abundant and incomparable treasure. But it is an inheritance that must be reclaimed by each generation. THE LIBRARY OF CHRISTIAN CLASSICS is designed to present in the English language, and in twenty-six volumes of convenient size, a selection of the most indispensable Christian treatises written prior to the end of the sixteenth century. The practice of giving circulation to writings selected for superior worth or special interest was adopted at the beginning of Christian history. The canonical Scriptures were themselves a selection from a much wider literature. In the Patristic era there began to appear a class of works of compilation (often designed for ready reference in controversy) of the opinions of well-reputed predecessors, and in the Middle Ages many such works were produced. These medieval anthologies actually preserve some noteworthy materials from works otherwise lost. In modern times, with the increasing inability even of those trained in universities and theological colleges to read Latin and Greek texts with ease and familiarity, the translation of selected portions of earlier Christian literature into modern languages has become more necessary than ever; while the wide range of distinguished books written in vernaculars such as English makes selection there also needful. The efforts that have been made to meet this need are too numerous to be noted here, but none of these collections serves the purpose of the reader who desires a library of representative treatises spanning the Christian centuries as a whole. ...