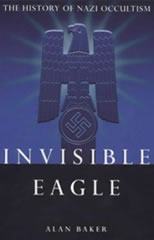 Introduction: search for a map of hell This book is concerned with one of the most controversial notions of the late twentieth century, one that is so bizarre and appalling in its implications that serious historians have consistently dismissed it as the worst kind of nonsense. Put simply, the notion is this: that the shocking nightmare of Nazism and the destruction it wrought throughout the world were the result of an attempt by Hitler and his cohorts to contact and enlist the aid of supernatural forces in their bid for domination of the planet. Upon reading this, older readers may be put in mind of the lurid but enjoyable occult thrillers of Dennis Wheatley, such as Strange Conflict, which deals with Nazi magical practices in a highly sensational way, and may dismiss the idea for that reason. Other readers may well pause to consider the hideous excesses practised by the Nazis and be dismayed that the defining tragedy of the twentieth century should be trivialised by such an idea. There is no doubt that the subject of the Third Reich inspires a deep and abiding fascination to this day, with the origin of the awful cruelties perpetrated in its name still the subject of intense debate. Ever since Hitler's death in the Fuhrerbunker in 1945, historians, psychologists and theologians have attempted to understand and explain the frightful aberration that was Nazism. One of the foci around which discussion of Hitler moves is the question of where he stands in the spectrum of human nature. As the journalist Ron Rosenbaum notes, the very existence of this spectrum suggests an extremely uncomfortable question: 'is Hitler on a continuum with previous and successive mass murderers, explicable within the same framework, on the extreme end of the same spectrum of the human nature we supposedly share with Jeffrey Dahmer and Mahatma Gandhi?" Or is he something else entirely, existing outside the continuum of humanity, evil in some absolute, ultimate way? The theologian Emil Fackenheim believes that such was the magnitude of Hitler's crimes that we must consider him as representing a 'radical evil', an 'eruption of demonism into history'. Hitler's evil is seen by thinkers like Fackenheim as existing beyond the bounds of ordinary human behaviour (however appalling). Indeed, to them it is so extreme that it transcends the field of behavioural science and enters the realm of theology: in other words, Hitler's ultimate nature can only be completely understood by God. ...