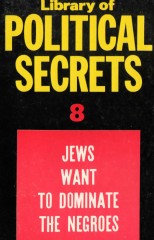 One of the main Jewish infiltrations in peoples of black race are the "Falasha" of Ethiopia, whose skin is black and who have the physical aspect of the negroes of the African continent. Some of them live in huts, like those of the poorest African negroes and are dressed with simple trunks as readers may attest in the pictures included in this chapter, which were taken from the Castilian Jewish Encyclopedia and the Jewish Encyclopedia, Israelite documents of utmost authority in Judaism. It is convenient for Judaism to infiltrate among the poor classes of the population, so that revolutionary leaders may appear in those classes to control the poor workers and peasants and launch them to the revolutions promoted by Jewish imperialism to conquer power over the gentile nations. The same thing happens in latin America, where the hidden Jewish power has clandestine Israelite communities in the countryside, in mountain ranges and wild regions both in Brazil and in the nations from Mexico to Chile and Argentina that were a part of the Spanish Empire. ...