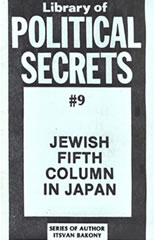 Introduction. Very few people are aware of the fact that there are a great number of people today who are considered to be of the Japanese race who are in FACT Jewish. The ENCYCLOPAEDIA JUDAICA, JEWISH ENCYCLOPEDIA and other publications go into detail on the history of people in India, China, Ethiopia, Persia and other countries who are today practicing Judaism and calling themselves "Israelites" or Jews. In a Dumber of countries those who have openly practiced Judaism and supported the State of Israel have been exiled from those countries and many have now become citizens of Israel. However, there is evidence that Jewish traders were abundant in Asia long before the Christian era. These Jews intermarried with the local people and after several generations simulated the appearance of the host people. ...