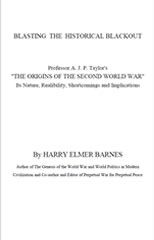 What is known as the "Historical Blackout" is a theme with which I have dealt in a number of places previously, such as brochures on "The Struggle Against the Historical Blackout," "The Court Historians versus Revisionism," "Revisionism and the Promotion of Peace," and the first chapter of Perpetual War for Perpetual Peace. What is meant by the term, in its more usual and current application, is the effort which has been made since the outbreak of the second World War to suppress the truth relative to the responsibility for this great conflict and the manner in which the United States entered the war. This has involved ignoring or suppressing the facts which run counter to wartime propaganda when writing books on these subjects, and suppressing, ignoring, or seeking to discredit those books which have taken account of such facts. In a broader sense, the term could be extended to include any efforts to suppress or discredit those historical works that run counter to the generally accepted views on public affairs, especially international relations. In my writings on the subject and in most of those produced in the United States, attention has been concentrated on the manner in which this policy and technique have operated in this country but the tendency has been general all over the civilized and literate world. After the first World War the defeated countries, such as Germany, Hungary and Austria presented such facts as they could bring forth to justify their case and demonstrate their innocence of sole or primary responsibility for the outbreak of war in August, 1914. This has not been the case since 1945. In neither Germany nor Italy has there been much activity in producing historical literature designed to present the case of these countries with respect to the events of 1939, and what is known as Revisionism - the effort to get at the truth on the second World War - has been sporadic and fragmentary in Japan. West Germany and Italy have almost outdone the victors in castigating their leaders of 1939 days and their alleged guilt, and the East Germans have been additionally throttled by the intensely Germanophobe and anti-Hitler attitude of Soviet Russia. ...