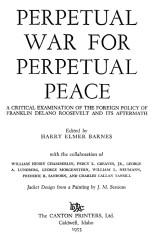 America goes not abroad in search of monsters to destroy. She is the well-wisher to the freedom and independence of all. She is the champion and vindicator only of her own. She will recommend the general cause by the countenance of her voice, and the benignant sympathy of her example. She well knows that by once enlisting under other banners than her own, were they even the banners of foreign independence, she would involve herself beyond the power of extrication in all the wars of interest and intrigue, of individual avarice, envy and ambition, which assume the colors and usurp the standards of freedom. The fundamental maxims of her policy would insensibly change from liberty to force.— JOHN QUINCY ADAMS. PREFACE. This book is a critical survey and appraisal of the development of American foreign policy during the Presidency of Franklin D. Roosevelt and of its results, as they have affected the course of world history, the national interest of the United States, and the welfare of its citizens. It was originally conceived by the editor as an answer to Basil Rauch's Roosevelt horn Munich to Pearl Harbor, the first full-sized effort to whitewash the interventionist foreign policy of President Roosevelt. When the prospective contributors were approached, they, without exception, questioned the logic and wisdom of directing the fire of a piece of heavy artillery against a mouse, however sleek and pretentious. They suggested, instead, a comprehensive review of the interventionist foreign policy since 1937 which would constitute an effective and enduring answer to the whitewashing and blackout contingents as a group, present and future. The editor has deferred to their superior judgment. Professor Rauch's contentions, however, receive adequate attention, not only incidentally throughout the volume but directly in the chapter by Professor Lundberg. The book here presented is not only an account of the actual course and aftermath of Roosevelt diplomacy, such as has already been factually and courageously set forth by George Morgenstern, Charles Austin Beard, Frederic R. Sanborn, William Henry Chamberlin, and Charles Callan Tansill, but it is also a consideration of the background and results of this diplomacy, and of the great difficulties met today by historians, social scientists, and publicists who honestly seek to discover and publish the facts relative to the foreign policies of Presidents Roosevelt and Truman. But the book is not a partisan polemic. The editor and the contributors fully recognize that more can be said in defense of the foreign policy of Messrs. Roosevelt and Truman than in behalf of the fantastic policy of their bipartisan Republican supporters, who cannot even invoke realistic political expediency in support of their attitude and conduct. Even much of the Republican criticism of the Roosevelt- Truman foreign policy boils down to little more than the allegation that it has not been sufficiently aggressive, ruthless, and global. The title of this book was suggested to the editor by the late Charles Austin Beard in our last conversation. With characteristic cogency and incisiveness, Beard held that the foreign policy of Presidents Roosevelt and Truman, and of their ideological supporters, whether Democrats, Republicans, Socialists, or Communists, could most accurately and precisely be described by the phrase "perpetual war for perpetual peace." Events since that time (June, 1947) have further reinforced Beard's sagacity and insight in this respect. George Orwell's brilliant and profoundly prophetic novel, Nineteen Eighty-Four, has since shown how a new political order throughout the world may be erected on the premises and implications of this goal of perpetual war, presented in the guise of a global struggle of free peoples for perpetual peace. ...