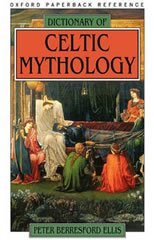 Preface. Following the publication of my A Dictionary of Irish Mythology (1987) there was a considerable expression of interest on both sides of the Atlantic and many readers were curious to place the Irish myths in their wider Celtic context. My publishers therefore suggested that I produce a further volume, A Dictionary of Celtic Mythology, to accommodate this heightened interest in the subject. The present volume is not designed to be an extension of A Dictionary of Irish Mythology. It is a self-contained volume. Naturally, it contains repetition with respect to many of the Irish entries; this is, of course, inevitable as Irish mythology constitutes the largest surviving section of Celtic mythology. However, A Dictionary of Irish Mythology, by virtue of its scope, carries a more detailed account of the Irish myths while this volume concentrates on the general sweep of Celtic mythology and also makes comparisons between the various branches of the Celtic myths. I have produced a composite alphabetical dictionary and made no effort to split the work into subsections dealing with the separate cultures: Irish, Welsh, and so on. However, the individual Celtic culture is clearly identified in each entry, and in the case of entries deriving from the two major Celtic cultures, abbreviations are given for identification: I = Irish and W = Welsh. As with A Dictionary of Irish Mythology, I should also point out that a major problem has been that of obtaining a consistency in the spelling of names. For the general reader this involves not simply the natural orthographical changes of a language over the centuries but also the numerous Anglicised distortions. Should Aranrhod be Arianrhod or Cúchulainn be Cú Chulaind? Should Cei be Kai or Kay? I have attempted to choose the most popular form in the native language, but where the choice has been a difficult one I have resorted to cross-references. ...