Blumenthal Max - The management of savagery 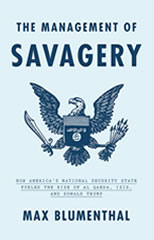 Introduction. The Unstable State. It was the week after Labor Day and Washington was filling up again with its chattering class, just back from summer sojourns up and down the coast. President Donald Trump was in town as well, paying the White House a visit after a series of golf trips and rowdy rallies before his Rust Belt loyalists. The White House, however, had been in a state of siege throughout the summer, as former FBI director Robert Mueller had led an investigation into Trump’s 2016 campaign and an allegation that the Russian government had subverted the presidential election in his favor. Though the Russiagate inquiry had produced nothing so far to demonstrate collusion, with the political season kicking back into high gear, the stage was set for two dramatic events carefully timed to turn up the heat on the president. The first event was the funeral of John McCain, a former prisoner of war turned Republican senator. Branded as a “maverick” by the Beltway press corps, which he halfjokingly referred to as his political base, McCain had operated throughout his career in complete lockstep with the military-intelligence apparatus. Over the years, he had junketed from one theater of conflict to the next, marketing jihadist insurgents and farright militiamen to the American public as “freedom fighters,” clamoring for military intervention and enriching his donors in the arms industry. A budget-busting $717 billion defense bill authorized days before his death on August 13 was appropriately dedicated in his name. ...