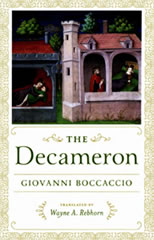 Introduction. One of the most famous opening lines in Western literature is surely that of Dante's Divine Comedy: Nel mezzo deL cammin di nostra vita. Dante records how, it in the middle of the journey of our life," he came to consciousness in a dark wood, having lost his way along the path that leads to salvation. After this beginning, the poet as wayfarer or pilgrim will travel from Hell through Purgatory until he finally winds up in Paradise and stands in the presence of God. Dante deliberately places his pilgrimage in his thirty-fifth year: his journey thus occurs at the biblical midpoint of his life, a key moment when he finds himself in between his own sinful past and his redeemed future. His epic poem of one hundred cantos is thus about being in the middle of things-and then, moving beyond. Both Boccaccio and his greatest literary work, the Decameron, are also very much about being in the middle of things, albeit without the urge to transcendence we find in Dante. Boccaccio started composing his book just after the Black Death had struck Florence in 1348, and since he was born in 1313, he would have been thirty-five that yearNeL mezzo deL cammin di nostra vita-just as Dante was when he woke up in the dark wood. But Boccaccio was in the middle of things in many other ways as well. ...