Bolton Kerry Raymond - Revolution from above 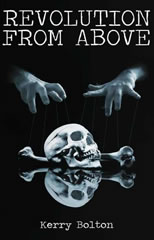 Introduction. "Globalisation’ and the ‘New World Order’ are two current phrases used to describe a process that has been proceeding for generations. International plutocracy has often pursued policies, used movements, and promoted doctrines that most people would consider to be anti-capitalist. Yet both capitalism and the Left arose during the same period of history, both have the same historical outlook, and both view traditional culture, the family, and nations as obstacles in the path towards a World State. Lenin is alleged to have described liberals as the ‘useful idiots of communism’ - serving as apologists for Bolshevik revolution by heralding it as a noble experiment. Our hypothesis, to the contrary, is that not only liberals but also communists are the ‘useful idiots’ of global plutocrats who desire a World Collectivist State. These interests are what Huxley in his prophetic novel Brave New World called the ‘World Controllers’, what President Dwight Eisenhower referred to as the ‘military-industrial complex’ in his ‘farewell speech’ to the American people, what Harvard historian Carroll Quigley wrote of as an ‘international network’ of ‘international financiers’, and what is commonly referred to as ‘Big Business’, which has become increasingly globalised. The main objective of this book is to expose what might be called the ‘feel-good’ and supposedly ‘progressive’ causes of a variety of types that fool often well-meaning people into serving as dupes for aims of which they know nothing, in the service of individuals and groups which they believe they are opposing; be it in the name of ‘peace,’ ‘human rights,’ ‘democracy,’ ‘women’s rights,’ ‘global warming,’ ‘world poverty,’ and so on. Not all such causes are unworthy. However, often the causes that are embraced by the wellmeaning have been contrived by those who offer bogus solutions to serve their own agendas. All of these are being pressed into the service of those who desire the creation of a ‘World State’ built upon the edifice of Mammon. ...