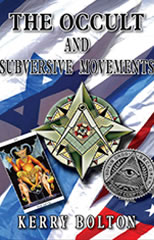 The Occult & Subversive Movements, provides an excellent overview of the conspiratorial view of history and the role of the occult therein. It also does so without the often heavy-handed, ideological baggage that affects many works in the genre. You allow the source materials, which are ample and well-cited, to speak for themselves. One thing that I strongly agree with is your assertion that the objective reality of doctrines and theories discussed is not the issue, but whether or not people were motivated to act on them or affected by those who did. I emphasize the identical thing in my class on Conspiracies and Secret Societies in History. In that respect I think your work is a worthwhile tool indeed. Dr Richard Spence Chair, Department of History University of Idaho. Dr Richard Spence Honors Program courses include: ‘Secret Societies and Conspiracies in History’, and ‘The Occult: Its Presence and Influence in History’. He is the author of : Secret Agent 666: Aleister Crowley, British Intelligence, and the Occult - Feral House. 2008 Trust No One: The Secret World of Sidney Reilly - Feral House. 2003 Boris Savinkov: Regade on the Left - Columbia University Press 1991. ...