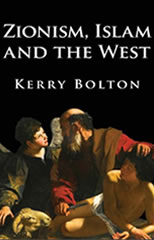 Preface. In international relations the clash of civilizations thesis seems to have replaced the ideological battle of the Cold War period. This thesis was originally proposed in 1990. In 1993 an article appeared in the Foreign Affairs magazine which was developed as a book in 1996 to guide the U.S. foreign policy makers advocating the hypothesis. Then 9/11 attacks occurred to support the hypothesis. Did the Zionists play any role in these developments? It is very difficult to assert because, as Kerry Bolton has rightly suggested, Zionists often operate to push sundry agendas in the name of attractive thoughts. Sometimes these ideas include noble dreams such as democracy, human rights etc. With the rise of Muslim extremism throughout the world it is very important that Muslims read this valuable work. Some Zionist-Orientalist scholars, who are well versed in Muslim history and culture, know very well the weak-points of 14 centuries of Muslim history. They are capable of pressing the right button at a right time to provoke strong reaction among Muslims. That is why Muslims must know Zionism and Orientalism very well and Kerry Bolton has made a valuable contribution in exposing Zionism. I strongly recommend this book to every student of contemporary Muslim cultural and political history. Dr. Abdullahil Ahsan, Professor and Deputy Dean, International Institute of Islamic Thought and Civilization, International Islamic University Malaysia. ...