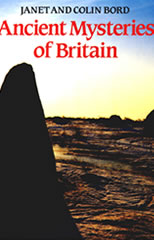 Preface. Thirteen years ago we wrote a book called Mysterious Britain which gave a taste of Britain and Ireland's rich past, with examples of the many surviving relics of ancient history. Since writing our first book we have travelled widely and have discovered many more mysterious and wonderful places, so we felt the time was right to produce another book continuing the story we began in 1972. In Ancient Mysteries of Britain we give details of many more places to visit as well as fresh thoughts on some of the major sites already covered in Mysterious Britain so that you too can enjoy at first hand the ancient mysteries of Britain and Ireland. The remains of prehistoric man's homes, tombs and temples, earthworks, rock carvings, early Christian crosses, caves, Roman ruins, early churches, hill-figures, holy wells, the Arthurian legend, dragons, mazes, folklore, customs and traditions, leys and earth energies, and finally some twentiethcentury mysteries - all these are represented in this book, and we include a small selection of the best examples in the 'Places to Visit' at the end of each chapter. Location details are given for all the sites included in Places to Visit, followed by the Ordnance Survey map reference. Other sites will be found in the guidebooks listed in the Bibliography, where are also listed books which describe certain aspects of our subject-matter in much greater detail. Most of the books mentioned have appeared within the last fifteen years, many within the last five, and therefore they should still be fairly easily available, in libraries if not still in print. ...