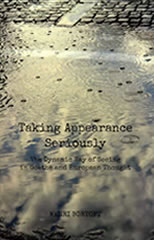 Into the Dynamic Way of Thinking Philosopher consiste a invertir la direction habituelle du travail de la pensee Henri Bergson. This is a book about a different way of thinking. The dynamic way of thinking - which is the general name I am going to give it - first appears in European thought at the beginning of the nineteenth century with Johann Wolfgang von Goethe and the early Romantics, and the philosophers Schelling and Hegel, all of whom were in and around Jena at the same time. Here, as always, it takes a form that is specific to the particular circumstances in which it appears. Confusing the container with the content, as we so often do, means that inevitably we end up focusing too much attention on the specific form which this way of thinking takes in a particular instance, and consequently fail to see the more universal content which is the movement of thinking itself. The dynamic way of thinking appears again in European thought in the first part of the twentieth century in the philosophy of phenomenology and hermeneutics. Here once again we are too easily seduced by the specifics of the occasion to notice the more universal element. Divergent as these philosophical movements may seem outwardly - and they are divergent - they nevertheless belong together when they are seen in terms of the movement of thinking which each expresses in its own different way. ...