Bortoft Henri - The wholeness of nature 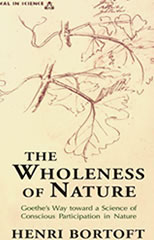 Author : Bortoft Henri
Title : The wholeness of nature Goethe's way toward a science of conscious participation in nature
Year : 1996

Preface. Why would anyone in the 1990s write a book on Goethe's way of science? Perhaps because of a scholarly interest—wanting to find out the truth about Goethe's scientific ideas, to discover what he had in mind. No doubt this would be a valid reason, but it is not mine. To begin with I don't speak German, so writing a scholarly book on Goethe would be, for me, equivalent to trying to climb a mountain without first having learned to walk. But what other reason could there be for writing about the scientific work of someone who died in 1832, especially when his ideas were rejected by the scientific establishment as the work of a muddled dilettante ? ...