« The science base of Homeopathic and anthroposophic - L'autre Histoire - 11 » 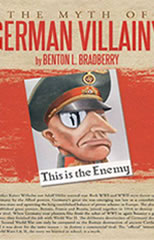 Preface. I served in the United States Navy from 1955 until 1977, mostly as a Navy pilot, and saw a lot of the world as a result. Aircraft carriers on which I served regularly visited European ports, as well as other ports around the world. I have also traveled extensively in the years since leaving the Navy. After traveling around most of Europe, Germany emerges as my favorite country. During our visits there we found the German people to be pleasant, industrious, disciplined and civilized with many similarities to traditional Americans. They in no way resemble the stereotypes depicted in all the anti-Nazi movies, books and articles we have been subjected to over the years. I am 74 as I write these words. My generation grew up virtually inundated with anti-German propaganda. We were taught, quite literally, to hate the Germans as a people. Yet, Germans I have met or befriended through the years seem no different from other Europeans, or even Americans, and they seem no more inclined to violence and militarism than anyone else; if anything, less. I have never detected anything that might be considered intrinsically “wrong” with the German character. They are a highly cultured, highly civilized people in every respect. When studied objectively, even Germany’s leaders of the 1930s and 40s were not very different from other European leaders. They were only made out to be different by the relentless hate propaganda directed against them. Germany suffered more than any other country by far as a result of World War II. Some 160 of her largest cities and towns were completely destroyed by the Allied bombing campaign and perhaps as many as 20 million Germans lost their lives as a result of the war. Yet, no one wants to hear their tales of suffering, and no sympathy has been allowed the defeated and disgraced Germans. The anti- German propaganda has cultivated the general feeling that they got what they deserved. The entire responsibility for starting both wars and for all the death and destruction resulting from them has been assigned to the Germans (though the facts don’t bear that out). Because they were the losers of both World Wars, they were never permitted to present their case before the world court, nor to tell their side of the story through any medium. The winners of wars, after all, write the history books. Neither did the true story of what happened during the war come out in the Nuremberg Trials. The Nuremberg Trials were nothing more than Soviet style show trials which violated every standard of traditional British and American justice. Their purpose was not to discover guilt or innocence, but to spread a legal gloss over a decision which had already been made to execute Germany’s leaders. The entire Nuremberg circus was a sham and a travesty. The anti-German propaganda, used to create the climate of hatred that made the massive destruction and the mass slaughter of German civilians possible, continued relentlessly long after the war was over when it would seem natural for sober minded historians to begin to moderate their extreme views about Germany. The fantastic atrocity stories continue even today. One needs only to tune in to the History Channel to see them repeated again and again. In contrast, World War I was not long over before the atrocity stories attributed to the Germans during that war were exposed as the deliberate lies they were. Responsible men conducted thorough investigations and found that none of it was true. All the lurid stories were deliberately fabricated to win British public support for the war against Germany and also to bring America into the war. ...

« The science base of Homeopathic and anthroposophic - L'autre Histoire - 11 »