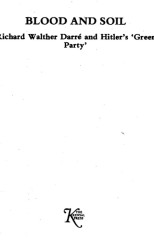 This book is a political biography of R. Walther Darré, Minister of Agriculture under the Nazis from 1933 to 1942, and populariser of the slogan 'Blood and Soil'. As the title of the book implies, he headed a group of agrarian radicals who, among other issues, were concerned with what we now call ecological problems. While not a formal party grouping, they were a significant enough power bloc to perturb Hitler, Himmler and Heydrich. Although it was not possible to provide a comprehensive biographical study of the Green Nazis in the space available here, it is hoped that this biography of Darré will be a step in that direction. ...