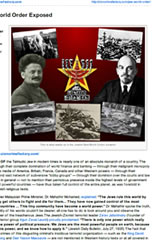 The rule of the Talmudic Jew in modern times is nearly one of an absolute monarch of a country. The Jews, through their complete domination of world f inance and banking — through their malignant monopoly of the mass media of America, Britain, France, Canada and other Western powers — through their inf luential and vast network of subversive “lobby groups” — through their dominion over the courts and law prof ession in general — not to mention their pernicious presence inside the highest levels of government of the most powerf ul countries — have thus taken f ull control of the entire planet, as was f oretold in ancient Jewish religious texts. As the f ormer Malaysian Prime Minister, Dr. Mahathir Mohamed, explained: “The Jews rule this world by proxy, they get others to fight and die for them… They have now gained control of the most powerful countries … This tiny community have become a world power.” Dr. Mahathir spoke the truth, and the reality of his words couldn’t be clearer; all one has to do is look around you and observe the terrible power of the treacherous Jews.The Jewish-Zionist terrorist leader Ze’ev Jabotinsky (f ounder of the Jewish terror group Irgun Zevai Leumi) proudly proclaimed: “There is only one power which really counts. The power of political pressure. We Jews are the most powerful people on earth, because we have this power, and we know how to apply it.” (Jewish Daily Bulletin, July 27, 1935) The f act that the vicious crimes of this disgusting criminal’s insidious terrorist organization — such as the King David Hotel bombing and Deir Yassin Massacre — are not mentioned in Western history texts or at all covered in High School and University history classes, is a testament to the veracity of his exultant statement. ...