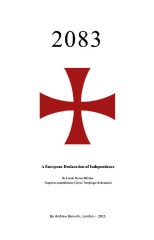 Introduction to the compendium - “2083” - The introductory chapter explains how “cultural” Marxism gradually infiltrated our post- WW2 societies. It is essential to understand how it started in order to comprehend our current issues. The chapter was written for the US specifically but applies to Western Europe as well. Introduction - What is “Political Correctness”? One of conservatism’s most important insights is that all ideologies are wrong. Ideology takes an intellectual system, a product of one or more philosophers, and says, “This system must be true.” Inevitably, reality ends up contradicting the system, usually on a growing number of points. But the ideology, by its nature, cannot adjust to reality; to do so would be to abandon the system. Therefore, reality must be suppressed. If the ideology has power, it uses its power to undertake this suppression. It forbids writing or speaking certain facts. Its goal is to prevent not only expression of thoughts that contradict what “must be true,” but thinking such thoughts. In the end, the result is inevitably the concentration camp, the gulag and the grave. But what happens today to Europeans who suggest that there are differences among ethnic groups, or that the traditional social roles of men and women reflect their different natures, or that homosexuality is morally wrong? If they are public figures, they must grovel in the dirt in endless, canting apologies. If they are university students, they face star chamber courts and possible expulsion. If they are employees of private corporations, they may face loss of their jobs. What was their crime? Contradicting the new EUSSR ideology of “Political Correctness.” But what exactly is “Political Correctness?” Marxists have used the term for at least 80 years, as a broad synonym for “the General Line of the Party.” It could be said that Political Correctness is the General Line of the Establishment in Western European countries today; certainly, no one who dares contradict it can be a member of that Establishment. But that still does not tell us what it really is. We must seek to answer that question. The only way any ideology can be understood, is by looking at its historical origins, its method of analysis and several key components, including its place in higher education and its ties with the Feminist movement. If we expect to prevail and restore our countries to full freedom of thought and expression, we need to know our enemy. We need to understand what Political Correctness really is. As you will soon see, if we can expose the true origins and nature of Political Correctness, we will have taken a giant step toward its overthrow. ...