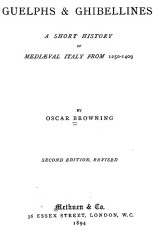 Chapter 1. Introduction - frederick Barbarossa - Innocent III. Frederick II. By those who divide the whole of history into three great periods, mediaeval history is held to begin with the year 476 A.D., the year which witnessed the fall of the Empire of the West. Whatever may have been the effect of this event upon the world at large, it was certainly a great crisis in the history of Italy. Romulus Augustulus, a Roman or a Pannonian by birth, whose name recalled, by a curious coincidence, the mythical origin and the constitutional establishment of the Roman Empire, was deposed from the imperial throne, and the Scyrrian Odoacer assumed the title of King of Italy. He reigned from 476 to 493. The year 489 marks the descent, into the Italian plains, of the Ostrogoths, the Eastern division of the great Gothic nation whose Western brethren conquered Spain and part of Africa. Their first king was the mighty Theodoric, whose palace still exists at Ravenna, and whose reign, immortalized in the earliest epics of the Teutonic race, extended over the first quarter of the sixth century (489-526). ...