Brugger Karl - The chronicle of Akakor 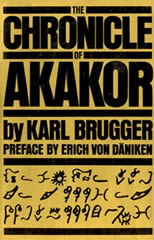 Preface by Erich Von Daniken. Scientists are not the only ones to strike it rich in exploring the unknown. Karl Brugger (born 1942), after completing his studies in contemporary history and sociology, went to South America as a journalist and learned about Akakor. Since 1974 Brugger has also been the correspondent of West German radio and television stations. He is now regarded as a specialist in Indian affairs. In 1972, Brugger met Tatunca Nara, the son of an Indian chieftain, in Manaus at the meeting of the Rio Solimôes and the Rio Negro, that is, at the beginning of the Amazon. Tatunca Nara is the chief of the Ugha Mongulala, Dacca, and Haisha Indians. Brugger, a skeptic and a conscientious researcher, listened to the truly incredible story the mestizo told him. After having checked it thoroughly, he decided to publish the chronicle he had recorded on tape. As I myself am used to the fantastic and always prepared for the extraordinary, I am not easily startled, but I must confess that I felt uncommonly moved by Brugger’s Chronicle of Akakor. It opens up a dimension that must make even skeptics see that the unthinkable is often imaginable. Incidentally, The Chronicle of Akakor fits accurately into the picture that is familiar to mythologists all around the world. Gods came from "the sky," instructed the first humans, left some mysterious apparatus behind, and disappeared again "into the sky." The devastating disasters described by Tatunca Nara can be linked in the most minute detail to Immanuel Velikovsky’s Worlds in Collision. The story of the Indian prince who had never seen Velikovsky’s works, his extraordinary descriptions about the course of a global world catastrophe, and even the exact dating are simply astounding. Also, the assertion that certain parts of South America are riddled with artificial subterranean passages cannot shock the expert. In a former book, I have reported seeing such underground structures with my own eyes. The Chronicle of Akakor provides answers to much that is only assumed in other works on similar subjects. ...