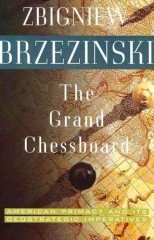 INTRODUCTION. Superpower Politics EVER SINCE THE CONTINENTS started interacting politically, some five hundred years ago, Eurasia has been the center of world power. In different ways, at different times, the peoples inhabiting Eurasia—though mostly those from its Western European periphery—penetrated and dominated the world's other regions as individual Eurasian states attained the special status and enjoyed the privileges of being the world's premier powers. The last decade of the twentieth century has witnessed a tectonic shift in world affairs. For the first time ever, a non-Eurasian power has emerged not only as the key arbiter of Eurasian power relations but also as the world's paramount power. The defeat and collapse of the Soviet Union was the final step in the rapid ascendance of a Western Hemisphere power, the United States, as the sole and, indeed, the first truly global power. Eurasia, however, retains its geopolitical importance. Not only is its western periphery—Europe—still the location of much of the world's political and economic power, but its eastern region— Asia—has lately become a vital center of economic growth and rising political influence. Hence, the issue of how a globally engaged America copes with the complex Eurasian power relationships— and particularly whether it prevents the emergence of a dominant and antagonistic Eurasian power—remains central to America's capacity to exercise global primacy. It follows that—in addition to cultivating the various novel dimensions of power (technology, communications, information, as well as trade and finance)—American foreign policy must remain concerned with the geopolitical dimension and must employ its influence in Eurasia in a manner that creates a stable continental equilibrium, with the United States as the political arbiter. Eurasia is thus the chessboard on which the struggle for global primacy continues to be played, and that struggle involves geostrategy—the strategic management of geopolitical interests. It is noteworthy that as recently as 1940 two aspirants to global power, Adolf Hitler and Joseph Stalin, agreed explicitly (in the secret negotiations of November of that year) that America should be excluded from Eurasia. Each realized that the injection of American power into Eurasia would preclude his ambitions regarding global domination. Each shared the assumption that Eurasia is the center of the world and that he who controls Eurasia controls the world. A half century later, the issue has been redefined: will America's primacy in Eurasia endure, and to what ends might it be applied? The ultimate objective of American policy should be benign and visionary: to shape a truly cooperative global community, in keeping with long-range trends and with the fundamental interests of humankind. But in the meantime, it is imperative that no Eurasian challenger emerges, capable of dominating Eurasia and thus also of challenging America. The formulation of a comprehensive and integrated Eurasian geostrategy is therefore the purpose of this book. Zbigniew Brzezinski Washington, D.C. April 1997. ...