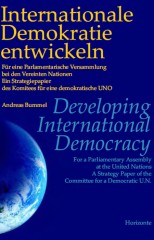 Author : Bummel Andreas
Title : Developping international democracy For a Parliamentary Assembly at the United Nations A Strategy Paper of the Committee for a Democratic U.N.
Year : 2005

Since the end of the Cold War the world order is going through a time of upheaval. After the breakdown of socialist planned economies, capitalism has prevailed as an economic system. In the time between 1970 and 1990 the peak of world trade experienced between 1880 and 1913 has been reached again, having been interrupted by the worldwide interbellum economic crisis and the world wars. Since the last lowest point in 1950, world trade has grown by the factor of 16, the gross world product by the factor of 5.5. The corresponding term of globalization reflects the increasing interconnection of national economies through foreign trade, direct investments and movement of capital. The classical pattern of international division of labour, simplified as exchange of raw material from developing countries with manufactured products of the industrial countries, is thereby undergoing a drastic structural change. Certain industries and services now spread over the whole world or are beginning to do so. At the same time, international movement of capital has separated from foreign trade. At the end of the 1990s, the share of financial transactions related to trade lies only between 2.5 to 5 percent of overall international foreign exchange. As national economies and financial markets have transformed into a single global market, companies have had to adapt to the concerns of a world economy. ...