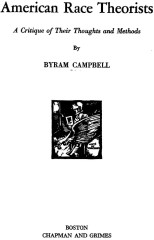 Foreword. I have been acquainted for a considerable time with the fallacies to be found in the arguments of the authors who are believers in racial equality. Based on these, I concluded that a false doctrine, one unjustified by the facts, was being fostered in this country, and that a worthy undertaking would be to place the truth before the public. As a preliminary step I hired a graduate student of Anthropology to search for material that could be used to this end. However, instead of gathering such, he submitted a paper in which the idea of racial equality was defended. It was quite obvious that he had but adopted the fallacious thoughts that I was already acquainted with. This beginner justified his position on the fact that it was based on the beliefs of the "best minds in the profession." His acceptance in principle of their opinions sug gested to me the form which this book has taken; that is, an exploration of the mental processes of these so-called "best minds." In the following pages the reader will find the dis coveries of this exploratory excursion. B. C.. ...