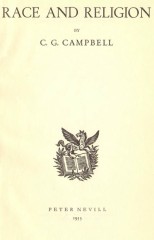 THIS BOOK, being largely concerned with the psychical causes which underlie human thought and action, is essentially a study in applied anthropology; and it essays to deal with the interrelation of Race and Religion - two matters that are basic to the adequate understanding of the human condition. Religion has to do with the spiritual, rather than the physical, nature of existence and will readily be recognized to be of prime importance in human life. But the equally important consideration is often neglected that Race, which embodies both the physical and the psychical characters which men inherit from their forbears, determines the inherent nature of each generation and of every individual, and is thus the major factor in shaping human action and human events. To ignore Race is to disregard the most important influence upon the outcome of human history; for it largely determines men's susceptibility to one kind of a religion or another. Upon both Race and Religion men's attitudes and judgments are prone to be subjective and emotional. This is much to be deplored, for it has acted to impede a more objective, serviceable, and tolerant understanding of them. Toward this desirable end this book seeks to make a contribution. The interrelation of Race and Religion is manifest throughout racial history. But its more immediate human interest and significance is obviously in respect to the part it plays in the Christian religion. Hence, it has seemed desirable in the present inquiry, both for brevity and for emphasis, to confine the consideration of its earlier activities to a broad outline of them, and devote attention more especially to its bearing upon the nature and history of the Christian religion. The period of history with which I have set myself to deal is obscure, and the evidence scanty; and I am conscious that for economy and convenience of statement I have frequently set down as factual what is only consistently circumstantial, inferential, and probable. That the traditional account of the origins of the Christian religion is contradictory and therefore untenable, is clear. One is put forward here which is coherent and seems to be distinctly more probable; and I am persuaded that, if it is not the whole truth, it none the less contains a substantial element of the truth and one that is disregarded, largely because it was and has been, more or less deliberately, suppressed. I desire here to acknowledge my great obligations to those who have so generously contributed a part of their valuable time to reading my manuscript and in giving me invaluable advice and suggestions. There is, however, no intimation that they endorse all its conclusions. To F. S. C. Northrop, to Silva Lake, to Robert H. Pfeiffer, and to J. Middleton Murry, I tender my most sincere and grateful thanks for their kind and valuable assistance. I likewise wish to express my warm thanks and appreciation to Mark Kiley for his kind and generous help in finding for me books and references that have sometimes been hard to come by. C. G. C. ...