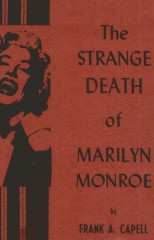 The author. Frank A. Capell is the Editor of the "Herald of Freedom," a national anti-Communist educational bi-weekly. Beginning as an undercover criminal investigator (tight-roper) for District Attorneys and Police Commissioners, he later became Chief Investigator of the \Vestchester County (N.Y.) Sheriff's Office. In this capacity he established a Bureau of Subversive Activities. He supervised the investigation of over five thousand individuals and organizations, including Nazis, Fascists and Communists, on behalf of the F.B.I. in most cases. During World War II he served as a civilian investigator overseas doing intelligence work. The author has been fighting the enemies of our country for twenty-six years in official and unofficial capacities. As a writer, lecturer, instructor, researcher and investigator, he has appeared before audiences, on radio and television from coast to coast. He maintains files on two million people who have aided the International Communist Conspiracy. Mr. Capell is the author of "Freedom Is Up To You" (now out of print), "The Threat From Within," "Treason Is The Reason" and "The Strange Case Of Jacob Javits." His biography has appeared for the last fifteen years in "Who's Who in the East" and "Who's Who in Commerce and Industry." ...