Carroll Charles - The Negro A Beast 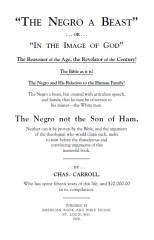 The Reasoner of the Age, the Revelator of the Century ! The Bible as it is ! The Negro and His Relation to the Human Family ! The Negro a beast, but created with articulate speech, and hands, that he may be of service to his master — the White man. The Negro not the Son of Ham, Neither can it be proven by the Bible, and the argument of the theologian who would claim such, melts to mist before the thunderous and convincing arguments of this masterful book. PUBLISHER’S ANNOUNCEMENT. In placing this book entitled “The Negro a Beast” or “In the Image of God” upon the American market, we do so knowing that there will be many learned men who will take issue with us, but while we are fully convinced of this, we are also convinced that when this book is read and its contents duly weighed and considered in an intelligent and prayerful manner, that it will be to the minds of the American people like unto the voice of God from the clouds appealing unto Paul on his way to Damascus. We have not brought out this book hurriedly and without due thought and consideration, but on the other hand we have had the manuscript under advisement for considerable time, and we have read and reread it until the ponderous sledge hammer blows of Prof. Carroll rang in our ears until the clang and din of his arguments convinced us that it would be a sin before God and man to withhold from the reading public such an array of biblical, scientific and common sense arguments. We are placing this book before the reading public as a witness to be questioned and cross-examined by the world, and if its pages will not stand the righteous attack of criticism, then we are willing for its arguments to be trailed in the dust of oblivion. We ask the reading public to carefully peruse its pages, and if in any particular there can be produced evidence that this book is not founded upon the bible in toto, and scientifically digested, then we are ready to close our doors, and place over its portals in burning letters of fire, “Deluded and Misguided by an Array of Biblical Truths Scientifically Discussed.” THE PUBLISHERS. ...