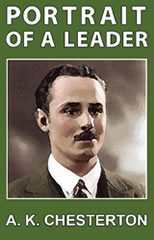 Preface. I do not 'Claim for this book that it is written in a spirit of cold detachment. No man who holds strong views about British politics would be able to summon up that spirit in a contemporary portrait of Oswald Mosley. The man and the movement of his creation break through any pretensions of neutrality. They are hated or admired and followed with a loyalty beyond the hope, though not beyond the envy, of all other men and all other political movements in Britain to command. It would have been possible, of course, to simulate a detached attitude, but not with honesty. I am an admirer of Mosley, and ten times greater an admirer after the research necessary for the writing of this book. If its authenticity on that account be denied, the reader is at liberty to seek redress in portraits (they are plentiful) painted by Mosley's enemies. I do not think that he will stumble upon any truer likeness. In this world it is from our friends and not from our enemies that we are likely to receive most justice. I have concentrated attention on Mosley, with only as much background sketched in as was necessary to explain his activities. Readers wishing for more detailed perspective should read James Drennan's masterly book "Oswald Mosley, B.U.F. and British Fascism." Similarly, in explaining the evolution of Mosley's views and his present policy I have left out all references, crossreferences and statistics, so that the reader might be presented with a swift-moving narrative. In order to fill in the gaps left by this method recourse should be had to Mosley's own book "The Greater Britain," which, in any event, nobody interested in Fascism should neglect to study. In conclusion, admitting the bias in my approach, I declare that I have set down nothing in these page$ which I do not believe to be true. A. K. C. ...