« The Nibelungenlied - Dilling Elizabeth - The Red Betrayal of Churches » 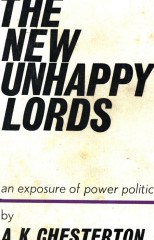 Although this book is written from a British point of view, my hope is that it will prove useful to the patriots of other lands, not least those of the United States and South Africa. In recent years several excellent American books, devoted to an exposure of traitors on that side of the Atlantic, and of their powerful protectors, have been published, and if their authors care to study the facts here made available, and the deductions drawn from them, they may conclude, as I have done, that the conspiracy in their midst, so far from having a purely American significance, is global and aims at securing as far as possible control over the whole world. They will certainly perceive that the techniques employed to bring about the subjugation of mankind are very much the same as and sometimes identical with, the techniques used for the furtherance of traitorous policies in the United States. ...

« The Nibelungenlied - Dilling Elizabeth - The Red Betrayal of Churches »