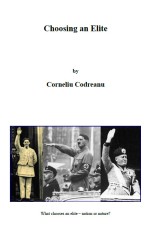 A people is not led according to its will-the democratic formula; nor according to the will of one individual-the dictatorial formula, but according to laws. I do not talk here of man-made laws. There are norms, natural laws of life; and there are norms, natural laws of death. Laws of life and laws of death. A nation is headed for life or death according to its respect for one or the other of these laws. A people is not capable of governing itself. It ought to be governed by its elite. Namely, through that category of men born within its bosom who possess certain aptitudes and specialties. Just as the bees raise their “queen” a people must raise its elite. The multitude likewise, in its needs, appeals to its elite, the wise of the state. Who chooses this elite-the multitude? Supporters could be found for any “ideas,” or votes for anyone running for public office. But this does not depend on the people’s understanding of those “ideas” “laws” or “candidates” but on something entirely different: on the adroitness of individuals to win the goodwill of the multitudes. There is nothing more capricious and unstable in opinions than the multitude….Its criterion for selection is: “Let us try some others.” Thus, the choosing is done not according to judgement and knowledge, but haphazardly and trusting to luck. Here are two opposite ideas, one containing truth, the other the lie. Truth – of which there can be but one – is sought. The question is put to a vote. One idea polls 10,000 votes, the other 10,050. Is it possible that 50 votes more or less determine or deny truth? Truth depends neither on majority nor minority; it has its own laws and it succeeds, as has been seen, against all majorities, even though they be crushing. ...