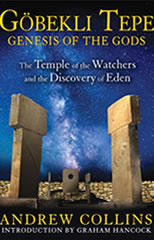 Author : Collins Andrew
Title : Göbekli Tepe Genesis of the gods The temple of the watchers and the discovery of Eden
Year : 2014

Introduction. By Graham Hancock. The new millennium promised much - the rising of Atlantis, the Second Coming of Christ, and the discovery of the Hall of Records in Egypt. Yet those of a New Age persuasion who had waited patiently for this all-important date were to be sadly disappointed. Even so, an archaeological discovery brought to the world’s attention for the first time in 2000 is now poised to make up for any sense of anticlimax that might have accompanied the millennial nonevent. I speak of Göbekli Tepe, a megalithic complex of incredible beauty and importance located close to the ancient city of Şanlıurfa in southeast Turkey. Here, quietly, since 1995, a series of stone enclosures of immense sophistication, each containing T-shaped pillars up to 18 feet (5.5 meters) tall and weighing as much as 16.5 US tons (15 metric tonnes), is being uncovered on a mountain platform close to the western termination of the Anti- Taurus range. Carved into the faces of the dozens of stone pillars and freestanding monoliths uncovered so far is a virtual menagerie of strange creatures that populated the world when these mysterious monuments were constructed between twelve thousand and ten thousand years ago. Foxes, wolves, lions, snakes, aurochs, hyena, ibex, and boars are seen alongside insects, arachnids, and various species of bird, including crane, vulture, flamingo, and a flightless bird with the likeness of a dodo. The quality and style of Göbekli Tepe’s strange carved art are at once breathtaking and mesmeric, a fact made even more incredible in the knowledge that we are told the complex was built by simple hunter-gatherer communities that thrived in an age before the emergence of subsistence agriculture and animal husbandry. ...