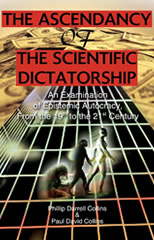 Authors : Collins Phillip Darrell - Collins Paul David
Title : The ascendancy of the scientific dictatorship An examination of epistemic autocracy, from the 19th to the 21st century
Year : 2004

Disclamer. Although this book presents an indictment of the Masonic Lodge as part of a Luciferian conspiracy, it does not present an indictment of individual Freemasons. The authors realize that there is a distinct difference between Masonry as a fraternity and Masonry as a religion. Many Freemasons are good people who have no idea that the higher Adepts adhere to a secret occult doctrine and are Luciferians. In fact, some Masons are even misled Christians who believe they are part of a God-fearing brotherhood. Such was the case with many of America's Founding Fathers. Moreover, it is important for readers to realize that the conspiracy of which these authors speak does not find its epicenter exclusively within the Masonic Lodge. No single entity alone constitutes this conspiracy. Many different organizations and individuals comprise it. At times, they appear to be in opposition. At other times, they appear to be in concord. However, their ultimate goal remains the same. Do not lay all of the blame on Communists, Nazis, liberals, conservatives, Republicans, or Democrats. Absolutely do not follow bigoted and racist voices that seek to exclusively indict Jews or other ethnicities. This is a deception and one that has allowed the conspirators to insulate themselves. Finally, realize that, with or without these groups and individuals, there will always be a conspiracy to fight. The conspiracy is within. Writing under inspiration of the Lord's Holy Spirit, the Apostle Paul identified this conspiracy : For we wrestle not against flesh and blood, but against principalities, against powers, against the rulers of the darkness of this world, against spiritual wickedness in high places (Ephesians 6:1 1-12). Ultimately, the war must be fought in the minds and the spirits of all mankind. ...