Comparet Bertrand L. - Is it enough merely to be an israelite ? 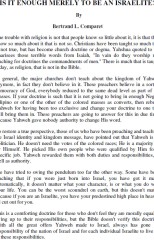 Author : Comparet Bertrand L.
Title : Is it enough merely to be an israelite ?
Year : 19**

The trouble with religion is not that people know so little about it, it is that they know so much about it that is not so. Christians have been taught so much that is not true, but has become church doctrine or dogma. Yahshua quoted to the Pharisees those terrible words from Isaiah, "In vain do they worship me, teaching for doctrines the commandments of men." There is much that is taught today, as religion, that is not in the Bible. In general, the major churches don't teach about the kingdom of Yahweh anymore, in fact they don't believe in it. These preachers believe in a sort of democracy of God, everybody reduced to the same dead level as part of the masses. If your doctrine is such that it is not going to bring in enough Negro, Filipino or one of the other of the colored masses as converts, then rebuke Yahweh for having been too exclusive and change your doctrine to one that will bring them in. These preachers are going to answer for this in due time, because Yahweh gave nobody authority to change His word. To restore a true perspective, those of us who have been preaching and teaching the Israel identity and kingdom message, have pointed out that Yahweh is no politician. He doesn't need the votes of the colored races; He is a majority all by Himself. He picked His own people who were qualified by Him for a specific job. Yahweh rewarded them with both duties and responsibilities, as well as authority. We have tried to swing the pendulum too far the other way. Some have been teaching that if you were just born into Israel, you have got it made automatically, it doesn't matter what your character, is or what you do with your life. You can be the worst scoundrel on earth, but this doesn't matter because if you are an Israelite, you have your predestined high place in heaven all cut out for you. This is a comforting doctrine for those who don't feel they are morally equal to living up to their responsibilities, but the Bible doesn't verify this doctrine. With all the great offers Yahweh made to Israel, always has gone the responsibility of the nation of Israel and for each individual Israelite to live up to these responsibilities. ...