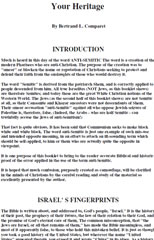 Introduction. Much is heard in this day of the word ANTI-SEMITIC The word is a creation of the modern Pharisees who are anti-Christian. The purpose of the creation was to "smear" or blacken the name or reputation of Christians seeking to protect and defend their faith from the onslaughts of those who would destroy it. The word "Semitic" is derived from the patriarch Shem, and is correctly applied to people descended from him. All true Israelites (NOT Jews, as this booklet shows) are therefore Semites; and today these are the great White Christian nations of the Western World. The Jews (as the second half of this booklet shows) are not Semitic at all, as their Canaanite and Khazar ancestors were not descendants of Shem. Their smear accusation "anti-Semitic" against all who oppose Jewish seizure of Palestine is, therefore, false. (Indeed, the Arabs - who are half Semitic - can truthfully accuse the Jews of anti-Semitism!) That fact is quite obvious. It has been said that Communism seeks to make black white and white black. The word anti-Semitic is just one example of such mis-use and intended opposite meaning, in an effort to attach an ill-sounding term which should be self-applied, to him or them who are actually quite the opposite in viewpoint. It is one purpose of this booklet to bring to the reader accurate Biblical and historic proof of the error applied in the use of the term anti-Semitic. It is hoped that much confusion, purposely created as camouflage, will be clarified in the minds of Christians by the careful reading and study of the material so excellently presented by the author. ...