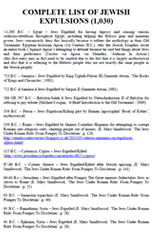 1,200 B.C. – Egypt – Jews Expelled for having leprosy and causing various seditions/rebellions throughout Egypt, including helping the Hyksos gain and maintain power; Jews venomously deny this basically because it refutes the mythology in their Old Testament; Egyptian historian Apion (1st Century B.C.), who the Jewish Josephus wrote an entire book („Against Apion‟) attempting to debunk because he said bad things about Jews and their perfectness (Tacitus via Apion via Manetho, „Judaism In Action‟) (this first entry may in fact need to be omitted due to the fact that it is largely mythistorical and also that it is referring to the Hebrew people who are not exactly the same people as the Jewish people). ...