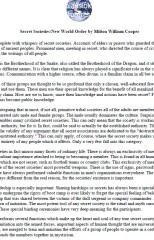 History is replete with whispers of secret societies. Accounts of elders or priests who guarded the forbidden knowledge of ancient peoples. Prominent men, meeting in secret, who directed the course of civilization are recorded in the writings of all people. The oldest is the Brotherhood of the Snake, also called the Brotherhood of the Dragon, and it still exists under many different names. It is clear that religion has always played a significant role in the course of these organizations. Communication with a higher source, often divine, is a familiar claim in all but a few. The secrets of these groups are thought to be so profound that only a chosen, well-educated few are able to understand and use them. These men use their special knowledge for the benefit of all mankind. At least that is what they claim. How are we to know, since their knowledge and actions have been secret? Fortunately, some of it has become public knowledge. I found it intriguing that in most, if not all, primitive tribal societies all of the adults are members. They are usually separated into male and female groups. The male usually dominates the culture. Surprisingly, this exactly resembles many civilized secret societies. This can only mean that the society is working not against established authority, but for it. In fact, could be said to actually be the established authority. This would tend to remove the validity of any argument that all secret associations are dedicated to the "destruction of properly constituted authority." This can only apply, of course, where the secret society makes up the majority or entirety of any people which it affects. Only a very few fall into this category. Secret societies in fact mirror many facets of ordinary life. There is always an exclusivity of membership, with the resultant importance attached to being or becoming a member. This is found in all human endeavors, even those which are not secret, such as football teams or country clubs. This exclusivity of membership is actually one of the secret societies' most powerful weapons. There is the use of signs, passwords and other tools. These have always performed valuable functions in man's organizations everywhere. The stated reason, almost always different from the real reason, for the societies' existence is important. The comradeship is especially important. Sharing hardships or secrets has always been a special thrill to man. No one who undergone the rigors of boot camp is ever likely to forget the special feeling of belonging and comradeship that was shared between the victims of the drill sergeant or company commander. It is an emotion born of initiation. The most potent tool of any secret society is the ritual and myth surrounding initiation. These special binding ceremonies have very deep meaning for the participants. Initiation performs several functions which make up the heart and soul of any true secret society. Like boot camp, the initiation into the armed forces, important aspects of human thought that are universally compelling, are merged to train and maintain the efforts of a group of people to operate in a certain direction. Initiation bonds the members together in mysticism. ...