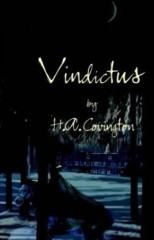 England. Autumn, 1652. I. In the fifteenth century, a landless knight-adventurer named Sir John Redmond rendered such bold and sterling service to the Yorkist party during the Wars of the Roses that he was rewarded with the manorial holding of Whitewood, in the county of Hereford. Two hundred years later, two brothers who were the last of the Redmond line rode home to Whitewood in the gloom of an autumn dusk. They too had fought for a disputed throne, but unlike their ancestor, they came home to Whitewood in defeat. The Redmonds rode down darkening country lanes in an unseasonably warm October twilight, to the weathered hulk of stone where they had each grown into a youth which was not yet manhood before they went to war. The younger brother, Thomas, had not been within the walls of the old manor house for more than four years. The elder brother, Denzil Redmond, had been gone for ten. By most reckoning they were in the prime of life, but the faces beneath the wide-brimmed felt hats seemed hewn from the same ageless granite as the walls of Whitewood. Their youth lay buried with the rest of the warıs corpses and débris, strangled in the acrid gunpowder fumes of Edgehill and Marston Moor and Naseby and a hundred other places without names, places where they had fought and killed and suffered. The bulk of the present manor hall was medieval, and had changed little since the days of the first Redmond. Squat, massive grey stone walls with narrow windows supported a sharply angled slate roof, and there were but two narrow, deep-set doorways front and rear. The first structure built on the site had been a crude stone tower heaped up just after the Norman Conquest by one of William the Conquerorıs thuggish barons, who used it as a base from which to fight off Welsh marauders, keep down Saxon rebels, and on occasion to indulge in a little robbery and pillage himself. One wing was anchored by a stout barn and granary of newer, ruddy brick, the other by the original Norman tower, crumbling yet forbidding. The tower was reuptedly haunted by ghost of the beautiful Lady Jeanetta Redmond, wife of the Yorkist lord, who had perished in the upper chamber under mysterious circumstances during the reign of Edward the Fourth. Family records showed that shortly thereafter, Sir John had married the redheaded daughter of a tavern keeper. They reined in at the gate of the park, staring through the deepening dusk at the dark mass which was the only home they had ever known outside the army. Behind them Tom Redmond led a single pack mule, lightly laden with two panniers containing everything they had in the world, mostly military equipment like their breastplates and their long steel gauntlets, smokeblackened so as not to give away an ambush through a telltale gleam. No light showed from the house through the trees. "I wonder if anyone is there?" said Tom. "Surely Sammy and Meg have stayed on, if they still live. Surely Sir Edward wouldnıt turn them out!" "Parliament says it belongs to Pelham now," said Denzil, his voice quiet with muted rage. "He can do what he likes, put in who he likes, turn out whomever he likes. For now." His face was lean and waxen in the gloom, his long dark Cavalier curls and sharply pointed black beard melting into the shadow beneath his hat brim. Even in the twilight his eyes seemed to gleam and wink in pain. Tom secretly thought that sometimes he saw incipient madness in his brotherıs eyes as well. A whorl of white twisted upwards over one of the chimney pots. "Smoke," said Denzil, pointing. "Someone is there. Letıs find out who." They trotted through the park and around the house to the stables in the rear. There was no one in the stables. The place was empty of beasts except for two spavined mules in the stalls, left behind to pull a rickety wagon that stood gauntly in one corner. No lowing of cattle came from the byres, no bleating of sheep from the folds, no snuffling of swine or cackling of fowl; not even a dog barked. The lofts and mangers were empty, the walls devoid of tools or harness. "Pelham and his parcel of Puritan rogues have stripped the place bare," observed Denzil bleakly. "We are here in our own home on the sufferance of a Parliament who murdered the king and a traitor who used the realmıs cataclysm to enrich himself by robbing his neighbours." "He probably took all our stock onto his own land to care for, because there were no tenants left and no labour to be had, with every man in the district dead or in the armies or running from the press gangs," Thomas replied. "You mustnıt impute malice to Sir Edward. He was ever our familyıs friend." "We have no friends among traitors," said Denzil. "I am going to see who is in our house, and if it is someone who has no right to be there I intend to tell them to leave. I will tell them only once." Denzil calmly checked the priming on a pair of pistols at his belt, holstered one and strode towards the door with the other in his hand. ...