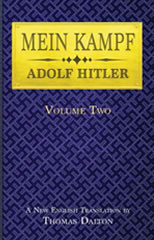 Chapter 1. Worldview and party. On 24 February 1920, the first great mass meeting of our young movement took place. In the Banquet Hall of the Munich Hotbrauhaus, the 25 theses of our new party program were explained to an audience of nearly 2,000 people ; each thesis was enthusiastically received. Thus we made the public aware of those first principles and lines of action by which the new struggle would abolish a mass of confused and obsolete ideas and opinion-things that had led to obscure and pernicious ends. A new force now appeared among the timid and feckless bourgeoisie. This force was destined to resist the triumphant advance of the Marxists and, at the last minute, bring the wheel of destiny to a halt. ...